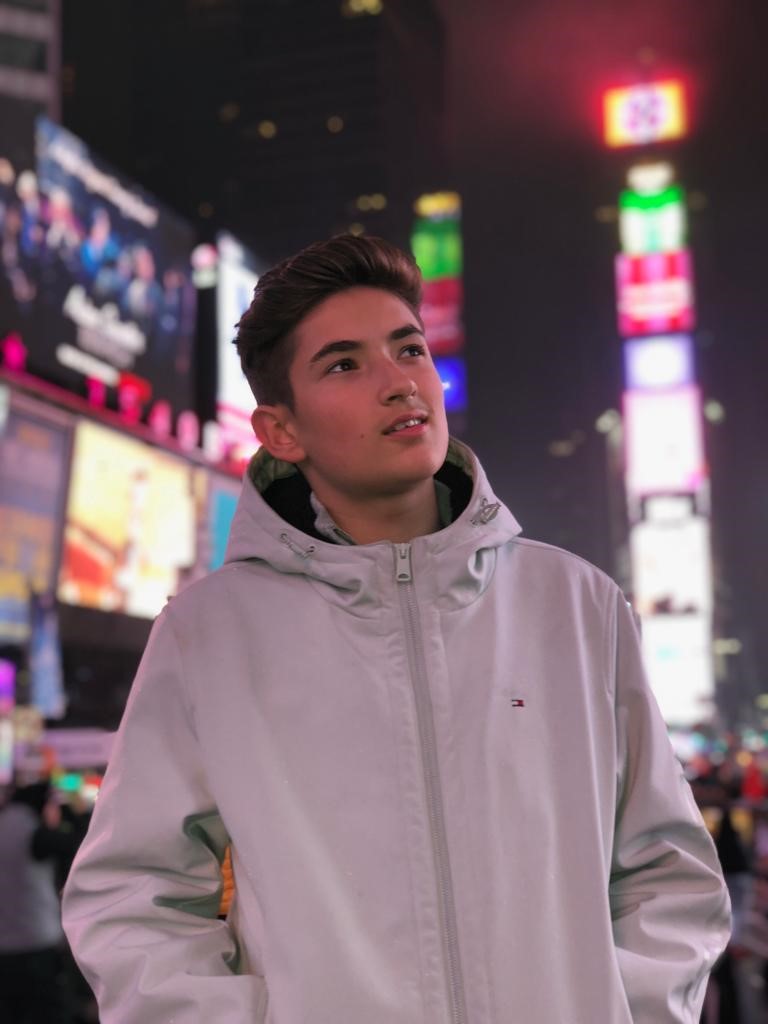 This week I managed to catch up with one of the newest members of the JSS family and his name is Charlie Gauntlett! We had a good chat about music, dreams and New York!

Hi Charlie, you are relatively new to the JSS family; how long have you been receiving mentoring from Amanda Neale?

And what was it that made you sign up to the JSS Artist Development programme?

So, I am friends with Sophia, Amanda’s daughter at school, and she told me that she heard I could sing and she told me what her mum [Amanda] does and thought that I should go and see her for an assessment and it was really good, I really enjoyed it so I decided to carry on!

Amazing! Well as you know I was at Amanda’s book launch for ‘Changing Sky’ in Reigate where you recently performed, how have you found the events that you have taken part in so far within the development programme?

Well I have done one radio show and the book launch so far and I just found, I don’t mind about the venue and how big it is, I have just enjoyed the opportunities I have had to sing, and sing to people because that’s what I plan to do.

So you’ve enjoyed being part of the JSS group so far?

Yeah it’s really nice, I like that it’s a mini family.

What influences do you have in the music industry? Is there anyone out there now, or past artists that you would compare yourself to?

There are so many different types of music on my playlist. Singer- songwriter stuff like Ed Sheeran, all the way to Rap and UK Grime so I have influences from every aspect of music, but I would say mainly Ed Sheeran, Justin Bieber and One Direction sort of inspired me to do music. And also my Mum as she sings as well!

What is about Ed Sheeran particularly that you feel influenced by? Is it his style of music, his song writing, his sound?

I feel like I already know the answer, but who would you most like to collaborate with in the music industry?

I’m probably contradicting myself a bit now [laughs], but I’d probably say Shawn Mendes! I just love his tone of voice and the type of music he makes. He’s like Ed Sheeran, I like his presence on stage and what he does.

What do you think is important to make a great artist in today’s industry?

I would say just be yourself and having something that’s unique about you that no one else has. Whether that’s in the type of music that you make or the way you do it, I think you need to have something that is unique to you. I don’t like it when you listen to the radio and you can’t tell who the artist is because it could be one of 5. That’s what I would like, that’s I want to be. You can listen to my song and you can tell it’s me. I never want to be just another ‘teenage singer songwriter’, I never want to be that. I want to be known for me.

We have a photo accompanying the article that was taken by your Dad, Steve Gauntlett in 2018, I gather this was taken in the USA.

Yeah, we went to New York last year and he’s been doing photography over the last couple of years so being a kind of Diva I got him to take a lot of photos of me over there! There’s quite a few. We were over there on a holiday and I want to live there now. I’ve fallen in love with the city. My plan is to move over there.

Well that brings me quite nicely to my last question, as you are now in the JSS Artist Development programme, your getting a lot of promotion, what are you hoping for the future?

Sing. Sing to people. I want to be able to make a living out of what I do. My dream, what I really want to do is be on stage in front of thousands of people, sing a slow song and everyone has their phone lights in the air. That’s my dream. I want to sell out Wembley. That’s my plan. I want to record and learn more about that but ultimately, I want to perform. That’s my goal. That’s my dream.

So there you have it, your first look Charlie Gauntlett and you can be sure you’ll be hearing a lot more from him in the near future!